Bokator is a martial art that literally translates “pounding on a lion.” It’s believed to have been developed around 2,000 years ago by the Khmer people in what is modern-day Cambodia. It’s also believed to be an early ancestral form of Muay Thai.

In addition to weapons techniques, bokator uses a wide range of elbow and knee strikes, shin kicks, submissions and ground fighting. Bokator fighters still wear the uniforms of ancient Khmer armies. A scarf is folded around their waist and blue and red silk cords are tied around the combatants head and biceps. At one time, the cords were believed to be enchanted to increase strength, although they are now mostly ceremonial. You can read more about the basics of bokator on its Wikipedia page. 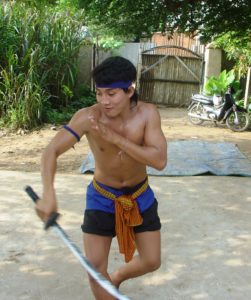 More than just a simple description and general information about the martial art, there’s a bokator revival currently going on in Cambodia. More than just in its popularity with Southeast Asia audience, what’s also interesting is that this revival seems destined to be better preserved for history that the practices and techniques used 2,000 years ago.

As originally reported by writer Marissa Carruthers from the South China Morning Post, Grandmaster San Kim Sean “has decided to break the tradition of orally passing down knowledge. In a race against time, he is sketching every move he knows – he says he has mastered all of the more than 10,000 bokator techniques which, together with his lifelong devotion to bokator, has earned him the title of grandmaster – to preserve them for the future.”