Rami Zaidan Ibrahim is the only American-Palestinian-American to ever win a unified USKA/WKA kickboxing world title. In fact, neither an American nor a Palestinian has ever held the title. More than just a great story, it’s a sign of the fact that martial arts of all types of growing in global popularity. Ibrahim earned the title after defeating New Zealand champion Quade Taranaki at the main event in Philadelphia, Pennsylvania on April 28, 2018. Ibrahim was born in Kuwait and immigrated to the U.S. in 1990. 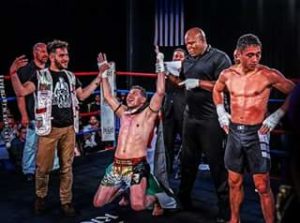 “Tonight I became the only UNIFIED WORLD CHAMPION in America. All praise and glory due to God,” Ibrahim wrote on his Instagram page. The fighter retired shortly after winning the title. “I came into this fight with a mission, a mission to please my mom, because as a Muslim, Islam teaches me that the doors of heaven is (sic) at the footsteps of our mothers. For 27 years my mother has seen me fight, traveled with me around the world, for over 2 decades I’ve given her high blood pressure from being so worried and scared for me. For years now she’s been begging me to retire.”

He continued, “I’m grateful enough to have won more than I wanted to win, to win all the championships there is to win, to have become, not only a multiple world champion, but also the only current American professional Muay Thai world champion in 3 different weight divisions.”

He said, concluding with the hashtag #TheSonOfPalestine: “Best part is tonight I won becoming unified world champion for Palestine and America.”